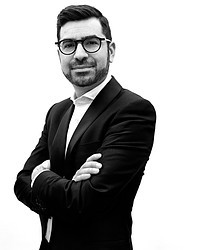 For his recital debut with Lincoln Center's Mostly Mozart Festival on July 24, 2019, pianist-composer Michael Brown performed for a rapt audience at the Kaplan Penthouse, offering a late-night program consisting of Mendelssohn's "Variations Sérieuses," his own "Folk Variations," and a set of Beethoven variations thematically linked to that composer's "Eroica" Symphony, which the Mostly Mozart Festival Orchestra had performed just minutes earlier in Lincoln Center's Geffen Hall. Here's what New York Times critic Anthony Tommasini had to say:

"Since the final movement of the 'Eroica' Symphony, which many in his audience had just heard, is an epic set of variations, Mr. Brown began with a colorful account of Mendelssohn's impetuous 'Variations Sérieuses,' then played his own flinty yet playfully pointillist 'Folk Variations.' Nodding to the orchestra's earlier program, he ended his recital with a fearless performance of Beethoven's momumental 'Eroica' Variations, in which Beethoven tried out themes later used in the symphony."