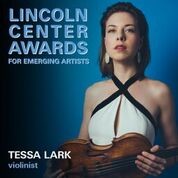 New York’s Lincoln Center for the Performing Arts has recognized violinist Tessa Lark as one of eleven Emerging Artists for 2020 and the recipient of its prestigious Hunt Family Award. In a November 14 news release announcing the awards, Lark is cited by Lincoln Center Artistic Director Jane Moss as “a brilliant musical force who defies categorization. On and offstage, she conveys expressive warmth and grounded authenticity. She engages effortlessly with audiences.”

Lark is the sole individual to be nominated as an Emerging Artist this year by the center itself rather than one of its many discipline-specific resident organizations such the New York Philharmonic, Metropolitan Opera, New York City Ballet, Film at Lincoln Center, Juilliard School, and New York Public Library for the Performing Arts. She will make her Lincoln Center recital debut May 10, 2020, on the Great Performers Series. Lark will also perform at a gala awards celebration recognizing the 2020 Emerging Artists, scheduled for February 26 in Lincoln Center’s Alice Tully Hall.