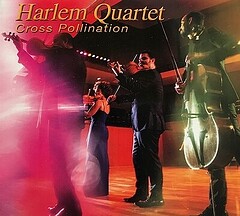 Harlem Quartet is known for the unique eclecticism of its repertoire, and the ensemble’s newest recording affirms that legacy. Cross Pollination, a self-produced CD to be released on July 17, features music from the European canon (Debussy’s String Quartet in G Minor, Op. 10); classic American jazz (Dizzy Gillespie’s A Night in Tunisia, as arranged by Dave Glenn and Harlem Quartet); a take on Ragtime by a contemporary European-American composer (William Bolcom’s Three Rags for String Quartet); and Cuarteto en guagancó, an African dance-inspired work by another eminent living composer, Cuba’s Guido Lopéz-Gavilán (father of Havana-born Ilmar Gavilán, Harlem Quartet’s first violinist).

Cross Pollination is a sampling of works currently in the tour repertoire of Harlem Quartet—whose members, in addition to Ilmar Gavilán, include Melissa White, violin; Jaime Amador, viola; and Felix Umansky, cello. As the quartet states in its liner notes, the album was “conceived to illustrate the cross-pollination of musical ideas between the European classical tradition and world music.” Debussy’s quartet was influenced by the sounds of Indonesian gamelan that he heard in Paris, and “his impressionistic style went on to have a profound influence on an emerging American genre, known today as jazz.” Gillespie, a pioneer of the modern jazz movement, “utilized harmonic elements traceable directly to Debussy.” The uniquely African-American style known as Ragtime was embraced by Bolcom, who “honored the genre with a great sense of humor” in Three Rags for String Quartet. And “parallel to the birth of early jazz in New Orleans with the Ragtime influence, early Cuban music also gestated from the confluence of European and African roots. Like Debussy, Guido Lopéz-Gavilán’s Guagancó takes non-western musical ideas and uniquely transfers them to western instruments.”