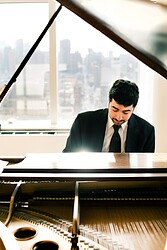 Michigan’s Kalamazoo Symphony Orchestra will present the long-awaited world premiere of Michael Brown’s Concerto for Piano and Strings on April 30, 2021, with Music Director Julian Kuerti conducting and Brown at the keyboard. Brown’s concerto—inspired by Beethoven and composed in 2020, a year rife with celebrations surrounding the 250th anniversary of that composer’s birth—was co-commissioned by the Kalamazoo-based Irving S. Gilmore International Keyboard Festival and Poland’s NFM Leopoldinum Orchestra. The initial performances were originally scheduled to take place during the Beethoven year with the Gilmore Festival Orchestra under Kuerti and in Wroclaw, Poland, under NFM Leopoldinum Orchestra Music Director Joseph Swensen. Both had to be cancelled as concert life came to a temporary halt due to the Covid-19 pandemic.

Brown composed the concerto while in residence at Copland House in Peekskill, NY. The three-movement work, he says, “seeks to integrate my own musical language with that of Beethoven, by weaving musical fragments of his various works into my own harmonic landscape. Specific Beethoven references include long pedal markings blurring harmonies and sonorities, as in the Largo of the Third Piano Concerto; extended use of trills; and the interweaving of small motivic fragments throughout the work. I have often dreamed of being a fly on the wall observing Beethoven playing his own creations, and I hope this may pay homage to him from the perspective of my being both a composer and a pianist.”

The Kalamazoo Symphony Orchestra’s April 30 performance will take place at 7 pm EST and is being streamed on the orchestra’s website, where it will be available for viewing through May 30.