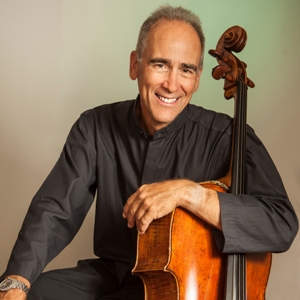 Carter Brey was appointed principal cellist of the New York Philharmonic in 1996, and made his subscription debut as soloist with the orchestra the following year in Tchaikovsky's Rococo Variations led by then-Music Director Kurt Masur. He has appeared as soloist with many of America's major symphony orchestras. With the Philharmonic, he has performed in the Haydn C Major Concerto under Music Director Jaap van Zweden; in the Barber, Dvorák, Elgar, and Schumann cello concertos under then-Music Director Alan Gilbert; in Richard Strauss's Don Quixote with music directors Lorin Maazel and Zubin Mehta; in the Brahms Double Concerto with then-Concertmaster Glenn Dicterow and conductor Christoph Eschenbach, as well as with Lorin Maazel on the orchestra's 2007 European tour; in William Schuman's A Song of Orpheus with conductor Christian Thielemann; and in the Boccherini Cello Concerto in D with conductor Riccardo Muti. He also performed the Brahms work at Tanglewood Music Center in the summer of 2002 as part of Kurt Masur's final concerts as the Philharmonic's music director.

Mr. Brey is cellist of the New York Philharmonic String Quartet, an ensemble that debuted in March 2017, performed during the Philharmonic’s spring 2017 European tour, and made its New York debut at the 92nd Street Y in November 2017. As a chamber musician he has collaborated with Harlem Quartet and has appeared regularly with the Tokyo and Emerson string quartets, at Spoleto Festival in the US and Italy, and at the Santa Fe and La Jolla chamber music festivals. Mr. Brey has performed in recital with pianist Christopher O'Riley, with whom he recorded The Latin American Album for Helicon Records. He partnered with pianist Garrick Ohlsson and violinist Leila Josefowicz in an acclaimed recording of Chopin's chamber music that was released in 2010 on the Helios label.

Mr. Brey rose to international attention in 1981 as a prizewinner in the Rostropovich International Cello Competition. Subsequent appearances with Mstislav Rostropovich and the National Symphony Orchestra were unanimously praised. His awards include the Gregor Piatigorsky Memorial Prize, an Avery Fisher Career Grant, and Young Concert Artists' Michaels Award.

A faculty member of the Curtis Institute of Music, Mr. Brey was educated at the Peabody Institute as a student of Laurence Lesser and Stephen Kates, and at Yale University, where he studied with Aldo Parisot and was a Wardwell Fellow and a Houpt Scholar. He lives in New York City with his wife, Ilaria Dagnini Brey. They have two adult children, Ottavia and Lucas. Among his outside interests are marathon running, ballroom dancing, and sailing.