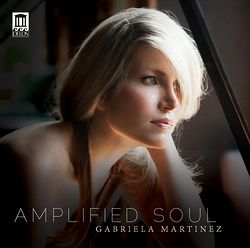 I didn’t know Ms. Martinez’s name before reviewing this, but she is well worth knowing. She won first prize in the Anton G. Rubinstein Piano Competition and was a semifinalist at the 12th Cliburn Competition, has already performed at a number of locations and with a couple of first-class orchestras, and (from the evidence of this recording and the biography) pays more than mere lip service to new music. The recording is very well made and the sound excellent in every way.

She begins with Beethoven’s Sonata 7. It is playful, light without becoming anemic; she includes excellent control over textures as well as subtle and effective articulation; the overall approach is lighter than necessary, but it works fine. She departs from several of Beethoven’s articulations in the trio of the minuet and the finale, but they make a musical effect, and it sounds like she made a conscious decision rather than a simple error of inattention. The same great control appears in Rachmaninoff’s Moment Musical 1 in B-flat minor, though here I wish the piano sound were a little brighter.

Two contemporary works are a mixed bag: Mason Bates’s White Lies for Lomax (2007), as the composer writes, “dreams up wisps of distant blues fragments—more fiction than fact, since they are hardly honest recreations of the blues”; the heterogeneous sounds are too incoherent, like a student work (though it is not particularly early); and the jazz- or blues-inflected passagework does not sound convincing here.

Dan Visconti’s Amplified Soul (2014) is far more effective. It derives, Visconti writes, from “the primordial sound of medieval music,” but the harmonic and melodic world sounds thoroughly new. (I didn’t read the note before I heard the music.) The work is beautifully conceived for the piano and exquisitely performed. The final work, Szymanowski’s Variations in B-flat minor, dates from the composer’s student years; Martinez’s performance, full of color and nuance, makes it sound like a masterpiece.