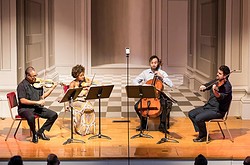 The Harlem Quartet returned to Martha’s Vineyard Monday night, bringing music from three centuries and four nations to captivate its audience at the Old Whaling Church in Edgartown.

It marked the seventh Island appearance by the Grammy-winning string ensemble, hosted by the Martha’s Vineyard Chamber Music Society.

“I’ve been friends with this quartet for quite a while,” said society co-founder Delores Stevens, introducing the group from the Whaling Church stage. “They just returned from playing Carnegie Hall.

“What I love about this quartet is that they have such a wide variety of repertoire,” she continued. “It’s lovely having them in our house.”

All four members of the ensemble — violinists Ilmar Gavilán and Melissa White, violist Jaime Amador and cellist Felix Umansky — have traveled the world and played with major orchestras. For their recordings with jazz stars Chick Corea and Gary Burton, the Harlem Quartet won three Grammy Awards in 2013.

Their jazz chops and superb classical technique alike were brilliantly on display at Monday’s concert, which began with Three Rags for String Quartet (1994) by American composer William Bolcom.

Originally composed for piano, Bolcom’s postmodern rags became so popular that he arranged them for many instruments and settings, Mr. Umansky told the Whaling Church audience.

The first rag, Poltergeist, must refer to “the clumsiest poltergeist that ever was,” Mr. Umansky said. The piece is full of musical humor, with spidery strings, staircase squeaks and mock-spooky pizzicati.

“We’re not really sure what it depicts,” Mr. Umansky said of Incineratorag, adding that the composer insisted on the one-word title. With curlicues of melody unspiraling against pizzicati and a false ending to surprise the audience, the piece is full of whimsy and left Vineyard listeners laughing as well as applauding.

Leaving the 20th century behind for the rest of the evening, the quartet then played the Quartet #3 in B flat, op. 67 by Johannes Brahms.

Composed in the summer of 1875, the work represents “a cheerful respite from the oppressive weight of finishing (Brahms’s) first symphony,” writes Paul Stevens in his indispensable program notes.

The work has an open-country feel perfectly suited for the Whaling Church on a summer evening, when green trees form a backdrop to the tall windows as the sky above darkens from lavender to deep blue.

Mr. Gavilán introduced the next work as “very dear to my heart, because it was written by my father” — Havana composer Guido López-Gavilán, who originally wrote it in 2005 for chamber orchestra.

Arranged for the Harlem Quartet in 2016, the single-movement Cuarteto en Guaganco is based on a traditional Cuban guaguanco dance rhythm. Mr. Gavilán said the guaguanco is an outgrowth of the basic rhythm known as salsa clave.

“It’s almost identical, but the third beat is a little bit delayed,” he explained, as Mr. Amador demonstrated on his viola.

Because these rhythms were originally drummed and chanted, Mr. Gavilán continued, the piece requires the string players to use their instruments for both percussion and melody — striking the body and plucking the strings as well as bowing them.

In performance, the short work had the fiery intensity of a Cuban descarga (jam session), delivered with the precision of conservatory-trained musicians at the forefront of their art.

After admission, the concert concluded with Claude Debussy’s 1893 Quartet in g minor, op. 10. Classically formed, but indisputably modern, the work moves impressionistically through sprightly and meditative moods and drew a standing ovation from the Vineyard audience.