Back to List
Acclaim
Harlem Quartet in the New York Times: A Strange Disappearance and What the Neighbors Have to Say About It
Tweet 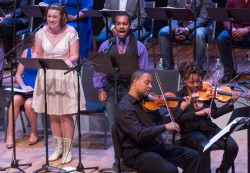 In light of the disappearance of Malaysia Airlines Flight 370 in March, David Lang’s “The Difficulty of Crossing a Field,” a musical-theater piece about a man who suddenly vanishes, has a particular resonance. With a libretto by Mac Wellman, the piece is based on the 1888 one-page story of the same name by the American journalist and fiction writer Ambrose Bierce, an abolitionist who was wounded in the Civil War and whose own disappearance at 71 — possibly in Mexico or by suicide in the United States — has never been explained.

Mr. Lang’s opera has been staged several times since its premiere in 2002, often with multimedia components. Beth Morrison Projects, which has developed a reputation for innovative stagings of contemporary opera, presented the 90-minute work at Roulette in Brooklyn on Sunday in a concert version — with the performers who had just finished the first studio recording of the piece, which will be released by Cantaloupe Records.

The story by Bierce, known for his bleak tales and preoccupation with death, depicts the disappearance in 1854 of a slave owner called Williamson, who vanishes while crossing a field near Selma, Ala., in sight of his family and neighbors. The event provokes varied responses from his relations and servants, and a magistrate rules that he is dead and orders the distribution of his estate.

Mr. Lang’s work explores the reactions of those who “witnessed” the disappearance with a musical-theater hybrid meshing the hypnotic allure of a Robert Ashley narrative and a pulsing accompaniment that evokes Philip Glass’s “Satyagraha.”

Mr. Wellman’s enigmatic libretto, featuring surreal snippets of verse repeated in both spoken sections and arias, lends a fantastical element to the proceedings, particularly though the character of the Williamson Girl, sung with commitment by Cree Carrico.

The string quartet accompaniment (potently rendered by the Harlem Quartet) effectively mirrors the dialogue, flowing from quietly ominous gestures to vigorous throttle. The arias are intertwined with gospel-tinged choruses, soulfully rendered by singers including the soprano Laquita Mitchell and the contralto Nicole Mitchell. The actor Jay O. Sanders charismatically rendered the characters of the Magistrate and Williamson. Isaiah Robinson, as Boy Sam, and Daniel Zippi, as Armour Wren (Williamson’s neighbor), also proved engaging.

Besides posing philosophical questions about existence and punishment, the work also examines the position of women and blacks in 19th-century America: The testimony of Williamson’s wife, vividly rendered by Beverly O’Regan Thiele, is inconsequential since she is deemed a hysterical woman; the testimony of the slaves is also dismissed.