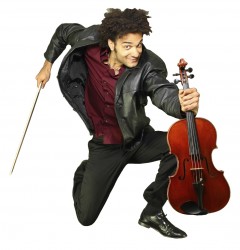 Twenty-four-year-old violist Juan Miguel Hernandez was awarded first place in his instrument's category at the prestigious International Johannes Brahms Competition earlier this month in Pörtschach, Austria. Each year, the International Johannes Brahms Competition draws more than 400 musicians from over 40 nations to compete in six instrument categories including viola, violin cello, piano, voice and chamber music. This year 54 violists traveled to Austria to compete in three rounds of competition, beginning August 30 with a final concert for the prize winners of each category held on September 6. Winners of the competition were chosen by a select committee of jurors and evaluated on the mastery of their instrument, musical artistry, expression and style.

Mr. Hernandez adds this first place prize to a distinguished list of honors, including the Gold Achievement award of the 9th National Sphinx Competition and the 1st place award in the National Canadian Music Competition. As a soloist, he has appeared with the Atlanta, Seattle and Colorado Symphonies, and the Rochester Philharmonic. Following his performance of Carl Stamitz's Viola Concerto with the Atlanta Symphony Orchestra, the Atlanta Journal-Constitution said: "Hernandez played with understated virtuosity-tender, lyrical and loaded with personality."

Mr. Hernandez is a founding member of the Harlem Quartet, an ensemble comprised of first-place laureates of the National Sphinx Competition. Since its critically acclaimed debut performance at Carnegie Hall in 2006 and numerous return appearances thereafter, the quartet partnered with White Pine Music label to release their 2007 debut recording, "Take the A Train," a disc of works by Wynton Marsalis and Billy Strayhorn, among others. The ensemble focuses on the advancement of diversity in classical music and the engagement of new audiences through the presentation of varied repertoire, including those of minority composers. In December 2008, the quartet performed at the National Library of Congress on Stradivarius instruments from the Library's collection. Wrote the Washington Post: "Violist Juan Miguel Hernandez drew the sweetest, most sonorous tone from the 'Cassavetti' Stradivarius in his hands for the evening." Mr. Hernandez and the Harlem Quartet's upcoming engagements include a performance with Itzhak Perlman at New York's Metropolitan Museum of Art on October 3, a concert at Carnegie Hall on October 7, and a performance at the U.S. Ambassador to the U.K.'s residence in London on October 19. The quartet's second album, an all-Piston recording, will be released by Naxos in 2010.

Born in Montréal, Canada of Dominican parentage, Juan Miguel Hernandez began studying the violin at seven years old, switching to viola at age 12. Mr. Hernandez is a senior faculty member at the Sphinx Performance Academy at the Walnut Hill School and is currently completing his studies with Paul Coletti at the Colburn Conservatory of Music. Mr. Hernandez was recently signed by Sciolino Artist Management and joins a distinguished roster of such artists as pianist Misha Dichter and cellist Carter Brey. For further information visit Juan Miguel Hernandez's website, www.hernandezjm.com.