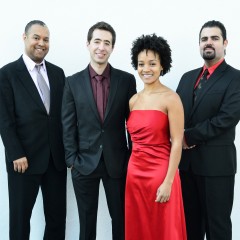 Born in San Juan, Puerto Rico, Jaime Amador Medina began his studies in the String Program for Children at the Puerto Rico Conservatory of Music as a student of Francisco Figueroa and Guillermo Figueroa. He was accepted to The Juilliard School, where he worked under Toby Appel. Mr. Amador later continued his studies at the Manhattan School of Music, during which time he participated in the International Videoconference with renowned violist Pinchas Zukerman. He has participated in several other master classes with Roberto Díaz, Michael Tree, Helen Callus, Paul Neubauer, Pamela Frank, Sylvia Rosenberg, and Hartmut Rohde, to name a few.

As a chamber musician, Mr. Amador has collaborated with such notable musicians as Emanuel Borok, Mikhael Kopelman, David Geber, Michael Lewin, Emilio Colon, Vanessa Perez, Mykola Suk and Eric Himy, among others. He was principal viola of the New England Ensemble, Camerata New York, and the New Bach Players, having played in prestigious venues in New York, such as Carnegie Hall, Avery Fisher Hall, Alice Tully Hall, as well as several concert halls across Europe.

Mr. Amador has participated in important international music festivals including the Meadowmount School of Music (where he was teaching assistant to Eugene Becker), Accademia Musicale Chigiana in Siena, Escuela Superior de Música Reina Sofía in Santander, the Academy of Music in New Jersey, the Norfolk Music Festival in Connecticut, and, most recently, the Carl Flesch Akademie in Baden-Baden, Germany.

Mr. Amador is a former member of the Puerto Rico Symphony Orchestra, where he was the winner of its Soloist Competition, awarded in 2007. On this occasion, the newspaper El Nuevo Día reviewed his interpretation of Béla Bártok’s concerto for viola and orchestra as “outstanding, having displayed sound technical mastery and a sobriety most appropriate to the nature of the piece. From the moment the viola alone is introduced, this young musician exuded confidence and aplomb, which was mirrored in the precision of his execution throughout the entire performance.”

Praised for his “impressive refinement, eloquent phrasing, and singing tone” by The New York Times, American cellist Matthew Zalkind has performed throughout the United States and abroad as a recitalist, soloist, and chamber musician.

As a soloist, Mr. Zalkind has performed concerti with such organizations as the Moscow Chamber Players, the Albany Symphony, the Hongzhou Philharmonic, the Utah Symphony, the Tongyeong International Music Festival Orchestra, and the Music Academy of the West Festival Orchestra in Santa Barbara. As soloist with the Juilliard Symphony Orchestra he performed in New York’s Avery Fisher Hall under the baton of Ludovic Morlot. Upcoming concerto appearances include the Shostakovich Concerto at the Kennedy Center in Washington, D.C., and the Haydn C Major Concerto in Salt Lake City, Utah.

An active chamber musician, Mr. Zalkind has participated in numerous music festivals, including Marlboro and Ravinia. He has collaborated in chamber music with Mitsuko Uchida, Richard Goode, Menahem Pressler, Charles Neidich, Bruno Canino, Scott St. John, Jonathan Biss, and members of the Guarneri String Quartet. In addition, Mr. Zalkind has performed at the Kennedy Center and in New York’s Alice Tully Hall and Metropolitan Museum of Art. He is a founding member, along with Emily Daggett Smith and pianist Michael Brown, of the West End Trio, which had its debut at Alice Tully Hall in April 2010.

Mr. Zalkind has a strong interest in teaching and outreach, and is currently a graduate student instructor at the University of Michigan in Ann Arbor. In addition, he was assistant faculty for two summers at the Meadowmount School of Music. Mr. Zalkind was awarded a Gluck Community Service Fellowship at The Juilliard School for four years, performing concerts at treatment facilities throughout the five boroughs of New York City.

A Salt Lake City native, Mr. Zalkind began his studies with Richard Hoyt. He has worked extensively with Pegsoon Whang, Hans Jensen, Ronald Leonard, and Alan Stepansky. Mr. Zalkind was accepted to The Juilliard School with presidential distinction in 2004 as a student of Timothy Eddy. He received his Bachelors Degree from Juilliard in 2008, and his Masters Degree 2010 as the recipient of Juilliard’s Irene Diamond Graduate Fellowship and the Rena Robbins Shapiro Memorial Scholarship in Cello. Mr. Zalkind is expecting his Doctorate of Musical Arts from the University of Michigan in 2013 as a student of Richard Aaron.

Their next performance takes place on New Year's Eve under the auspices of the Santa Fe Concert Association.