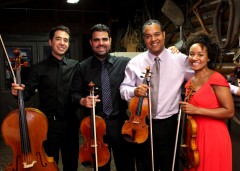 "You know, let's face it. When you think of classical music, it's not really an African American face that comes to mind," says Melissa White, a violinist and founding member of the Harlem Quartet.

But in a genre historically dominated by Europeans, the quartet is doing its part to change all that.

Founded by the Sphinx Organization in 2008, the Grammy-winning group was created to advance diversity in classical music, while engaging new audiences with a varied repertoire that includes works by minority composers.

Combined, African Americans and Latinos account for less than 4 percent of musicians in American symphonies.

"Diversity in classical music is a very positive ideal, because for so many years, in this country, that ideal was a homogenous thought. By bringing in different cultural values and viewpoints, they are bringing an American ideal of melting pot to the stage," says Moses Bernard Philips, a professor of ethnomusicology at CUNY's Medgar Evers College.

After a few personnel changes over the years, the quartet became even more diverse. Matthew Zelkind, a Jewish cellist from Salt Lake City, and Jaime Amador, a viola player from San Juan, Puerto Rico, joined the group in 2012.

Despite the quartet's talent, it hasn't always been received well.

"We had important mentors that would tell us, 'I don't think you will work in the European market.' We knew that meant, not only [was he] talking about the quality of our playing, but just the image," explains Ilmar Gavilan, a Cuban violinist and founding member.

To accommodate these audiences, the Harlem Quartet has started performances with jazz repertoire and sneaked in classical pieces to show that it can perform a variety of music.

"The Harlem Quartet projects a phenotype that when people see what is happening or when they see who is performing, they begin to change their attitude about what that group is and what they're capable of doing," says Philips.