Juan-Miguel Hernandez
viola | US and Canada 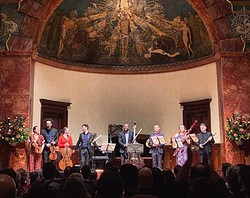 Nobody could deny that this was a weekend when we needed cheering up. The place for that was the Wigmore Hall, which played host to a recently formed “shape-shifting” ensemble of superb young soloists. The Kaleidoscope Chamber Collective was launched in 2017 by the violinist Elena Urioste and pianist Tom Poster (incidentally, they got married last summer). For their Wigmore Hall residency they gathered a starry team of clarinettist Mark Simpson, bassoonist Amy Harman, cellist Laura van der Hejden, horn player Alec Frank-Gemmill, violist Jean-Miguel Hernandez and double bassist Joseph Conyers.

Across two evenings the “collective” built up a range of repertoire that was, well, kaleidoscopic, mixing the rare with the beloved from duos and trios up to the Beethoven Septet and beyond. I caught the second concert; it left me wishing I’d been there for the first as well.

Opening with the Mozart Bassoon Sonata in B flat K292, arranged by Iain Farrington for soloist with string trio, the charismatic Amy Harman quickly proved that her instrument’s burnished, husky voice was the closest thing Mozart had to a saxophone; and the nearest a chamber ensemble can offer to a character baritone, something pleasingly emphasised by a naughty little quotation from Don Giovanni in the finale (I’m guessing this was Harman’s extemporisation).

The bassoon is so underrated these days that there’s a shortage of young players of school age; Harman is just the advocate it needs. The Sextet Op. 37 by Dohnányi, written in 1935, was nevertheless the evening’s big rarity and revealed the composer, the sometime head of the Budapest Academy, throwing numerous central European influences into a red-hot melting pot and serving it up rather Brahms and Liszt. The full, rugged textures are very much the former, the grand-gestured Hungarian march in the Intermezzo totally the latter, but every sense applies. The finale not only borrows tricky dance rhythms from folk language, but adds a louche episode of Viennese waltzing plus a dose of jazz. It really is that nuts, and I loved it. With the melliflous and debonair pianism of Poster, Simpson and Frank-Gemmill in unison melding their sounds into something unique, rather like the tone of the Hungarian tarogato, and the strings giving it all they’d got - dark, string-crossing eloquence from van der Hejden set it off to a splendid start - one couldn’t not.

There’s no more life-affirming piece than a well-played Beethoven Septet, and the ensemble here, expertly led by Urioste, fizzed, danced and dreamed their way through it with a refreshing lack of affectation. The Adagio basked in the sun of Simpson’s clarinet, the minuet was brusquely down-to-earth, the horn-call scherzo bouncy. Some occasionally over-edgy moments in the finale ultimately added adrenaline, while the ensemble made the most of the composer’s predilection for celebrating joy.

As encore, since there isn’t a lot of music for these eight instruments, Poster brought his own arrangement of Gershwin’s "They Can’t Take That Away From Me". It proved a delight, full of close-harmony big-band treats, topped by Simpson ascending into the stratospheres. We went out humming into Storm Dennis - and the highly entertaining programme notes by David Owen Norris kept me smiling on the train home.