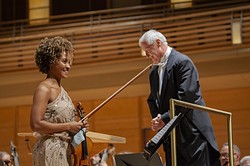 On Saturday at Strathmore, the National Philharmonic and conductor Piotr Gajewski marked Black History Month with a concert of “Black Classical Music Pioneers,” featuring African American composers past and present. The program offered intriguing stylistic variety. Sometimes, it challenged the orchestra. In the end, it occasioned a wish for freer movement across classical music’s historical and institutional borders.

Things got off to a shaky start with Wynton Marsalis’s “Wild Strumming of Fiddle,” an excerpt from his vast, blues-grounded 1999 oratorio “All Rise”: a stylized hoedown, the harmonies stacked higher, the polyrhythms compounded. The group had performed it before, as part of a 2017 production of the entire work, but here, the accents were heavy-footed, the backbeat was adrift and the rhythm never came into focus.

The rest was, happily, more solid. Florence Price’s Violin Concerto No. 1, with soloist Melissa White, put the musicians on more traditional European-classical ground. Like much of Price’s ¬recently rediscovered catalogue, the 1939 concerto takes 19th-century models — Tchaikovsky and Dvorak, especially — as jumping-off points. White was an excellent advocate, prioritizing ease and fluency over intensity, suiting the music’s lyric and episodic nature. The finale, a harmonically twisty triple-time scherzo, felt a little logy, lateral energy dissipated by vertical emphasis, but the rest had a flowing warmth.

George Walker’s precisely rhapsodic 1946 “Lyric for Strings” received a dignified reading, a well-paced build of fine-control counterpoint. In the most familiar work, William Grant Still’s 1931 “Afro-American” Symphony No. 1, Gajewski and the orchestra came down very much on the symphonic side of symphonic jazz. The rhythms were right-angled — syncopations waiting for downbeats rather than complementing them, swinging sections more conscientious than carefree — but the colors were bold and vibrant.

Walker, an uncompromising craftsman with an aversion to categorization, once called the “black composer” label a “two-edged sword”; on Saturday, the pleasure in hearing the music was coupled with the frustration of hearing it isolated from the larger repertoire. Price’s individuality might sound more clearly, for instance, alongside her Romantic prototypes, Still’s thesis more singularly contrasted with the jazzy efforts of contemporaries — Milhaud, Ravel, Gershwin (the latter pointedly quoted in Still’s third-movement “Animato”). In prefatory remarks, Gajewski acknowledged that orchestras — the National Philharmonic included — have too rarely programmed composers outside the largely white and male enclave of the classical canon, and suggested casting a wider future net. One hopes Saturday’s concert launches more music into dialogue with the rest of the ¬tradition.