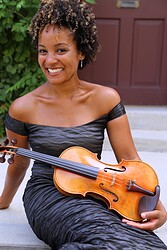 Violinist Melissa White makes her solo debut with the Cincinnati Symphony Orchestra this winter in a pair of concerts led by Music Director Louis Langrée. On a program titled “Traveling with Mozart,” she will perform Mozart’s Violin Concerto No. 3 in G Major, K. 216, dubbed “Strasburg” because of the theme in its opening Allegro movement. The concerts, which also include Mozart’s Symphony No. 31 (“Paris”) and Symphony No. 38 (“Prague”), will take place in Cincinnati’s Music Hall at 7:30 pm on Saturday, March 13 and 2 pm on Sunday, March 14.

As a concert soloist, White has brought repertoire from four centuries to a variety of American orchestras in recent seasons. In May of 2018 she performed Saint-Saëns’s La muse et le poète with the Chicago Sinfonietta—whose music director, Mei-Ann Chen, has called her “a mature artist, with incredible confidence and conviction combined with beautiful tone and deep understanding of the music.” The following season she brought the Barber Violin Concerto to the Pasadena Symphony, with Music Director David Lockington conducting. Last fall, at the Richmond Symphony under Valentina Peleggi, she was the soloist in Mozart’s Violin Concerto No. 5. With the National Philharmonic led by Music Director Piotr Gajewski, White has performed the Brahms Violin Concerto and, more recently, the Violin Concerto No. 1 by African-American composer Florence Price, a work from 1939. And next April White will appear with the Albany (NY) Symphony Orchestra and Music Director David Alan Miller in a work dating from early in this century: George Tsontakis’s Violin Concerto No. 2, winner of the 2005 Grawemeyer Award for Music Composition.

White is a graduate of the Curtis Institute of Music and New England Conservatory, a first-prize laureate in the Sphinx Competition, and a founding member of New York-based Harlem Quartet, which has commanded a broad and diverse repertoire since its founding in 2006. The quartet’s latest album, a self-produced CD called Cross Pollination, features music by Debussy, Dizzy Gillespie, William Bolcom, and the contemporary Cuban composer Guido López-Gavilán.

Her current instrument, “Matilda,” was commissioned as part of a Sphinx MPower Artist Grant in 2014 by the American violin maker Ryan Soltis.