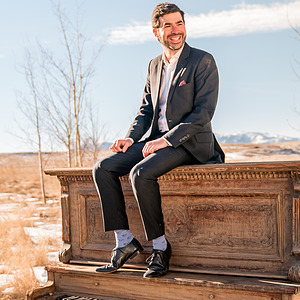 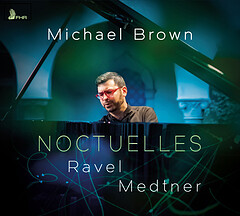 Noctuelles, a new solo album from pianist-composer Michael Brown featuring two gems of the 20th century piano repertoire, was released January 22 by the British label First Hand Records. The album showcases Brown’s virtuosity in music composed by Maurice Ravel and Nikolai Medtner in Paris at the height of their careers. Miroirs is Ravel’s imaginative sound-picture of night moths (“noctuelles”), exotic birds, boats in the ocean, jesters, and bells. It is paired on the album with Medtner’s Second Improvisation (in variation form), an epic depiction of mermaids, elves, gnomes, birds, wood goblins, and streams. Noctuelles was recorded at Tippet Rise Art Center in Fishtail, Montana, and produced by two of Brown’s friends and fellow pianists, Adam Golka and Roman Rabinovich. From among the several fine instruments available at Tippet Rise, Brown chose CD-18, a mid-20th century New York Steinway that had been one of Vladimir Horowitz’s favorite pianos and was later owned by Eugene Istomin.

In an essay posted on the Tippet Rise website, Brown wrote about the experience of recording at that venue. As for the repertoire he chose for Noctuelles, he says, “Ravel is a composer who spoke to me from an early age. Medtner, on the other hand, is relatively new to me and was introduced to me by two friends, Adam Golka and Tali Mahanor. Second Improvisation is a rarely played gem, and there are only a handful of recordings.” Miroirs and Second Improvisation, Brown notes, “work together as a fitting pair—two early 20th century artistic statements for the piano that paint evocative fantasies on nature and fairy-tales.”

Detective Goose Chase
An especially notable feature of the new album is Brown’s inclusion of two previously unpublished—and unrecorded—variations in Medtner’s Second Improvisation: “La Cadenza” and “Pesante.” Uncovering this “new” material was the result of diligent scholarship on Brown’s part. As he tells, it, “First Hand Records director David Murphy alerted me to a line in Barrie Martyn’s biography of Medtner stating that there may be unpublished variations to the Second Improvisation. I was immediately riveted, and started a detective goose chase trying to track them down. I contacted Medtner afficionados throughout the world, and finally I was led to the National Library of Canada in Ottawa, where I learned that they housed 89 pages of sketches and drafts of the Second Improvisation in Medtner’s handwriting. To my delight, there are two complete variations that were not included in the published work. Sincere, languorous, and sublimely gorgeous are just a few words that came to mind upon reading through this music. Through months of trial and error, I came up with the order for this program—which is based on Medtner’s various order possibilities in the sketches, combined with my own aesthetic sense.”

Noctuelles is available at all streaming sites and the Tippet Rise downloads page. Brown was also captured in action performing the “Alborada del gracioso” movement of Ravel’s Miroirs in a video produced at Tippet Rise.