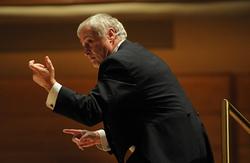 The hardy souls who braved the frigid elements Saturday night to hear music from Imperial Russia at Strathmore were rewarded with as fine a concert, I wager, as has been heard in or around Washington this season. The perpetrators were the National Philharmonic, conducted by its music director, Piotr Gajewski, and the evening’s guest soloist, Shanghai-born pianist Haochen Zhang.

The National Philharmonic displays commitment, elegance and precision that add up to some of the most gorgeous orchestral playing this listener has heard lately, from ensembles resident or visiting. Gajewski’s impeccable technique sets him apart from most of the local competition. He doesn’t rely on a score, except of course when accompanying a soloist, nor does he use a baton, and he communicates his intentions to the orchestra with the utmost economy of motion. The ensemble can speed up, slow down, grow to a roar or diminish to near silence on a dime, with complete unanimity. Gajewski also has unerring taste and a sense of proportion. Nothing is overblown or exaggerated. Everyone onstage seems to share an unmistakable joy in making music together, and the audience can’t help but feel it.

Tchaikovsky’s Fantasy-Overture, “Romeo and Juliet,” overexposed and trivialized by decades of service to film and broadcast media, has to be one the more threadbare orchestral war horses. In this performance, however, it emerged with fresh, vital urgency. Tchaikovsky’s evocations of violence, yearning tenderness and ultimate tragedy were restored by means of clarity and finesse, making the emotional impact of the score irresistible.

Rimsky-Korsakov wrote a famous textbook on orchestration that is still studied today, and his “Capriccio espagnol” is a veritable lexicon of the sounds and effects possible on orchestral instruments, individually and corporately. If space precludes naming the individual players who took turns in displays of virtuosity, each more perfect than the next, the overall kaleidoscope of color, texture and rhythmic swagger was viscerally thrilling and enormous fun.

Rachmaninoff’s Third Piano Concerto, written for the composer’s first American tour in 1909, shares with the Second Concertos of Bartók and Prokofiev the dubious distinction of being the most technically challenging of the standard repertory. Many pianists come to grief attempting to articulate the exquisite poetry that lies concealed beneath Rachmaninoff’s incessant, almost impenetrable barrage of notes. Haochen Zhang is not one of them. His performance was not entirely perfect. There were times, when the orchestra had the lead, you wished he would simply accompany, rather than pointing up interesting supporting harmonies and figurations. That said, Zhang, at 24, has all the qualities of a great Rachmaninoff interpreter. He can execute warp-speed passages in a whisper, release great surges of energy, command a stentorian sound when things get heroic and, above all, spin out a golden singing line with aristocratic restraint. Zhang’s demeanor at the instrument is poised, relaxed, almost serene. Then, when you least expect it, as in the first-movement cadenza, it’s as though the mouth of hell has opened up, flames leap from the piano strings and the odor of sulfur fills the air. Zhang’s dazzling playing is without gimmick or ostentation. His imagination is what keeps you on the edge of your seat and breathless to hear what comes next. Pianist, conductor and orchestra achieved a rare hand-in-glove sense of ensemble. The instantaneous, vocal standing ovation was as inevitable as it was deserved.

Rucker is a freelance writer.