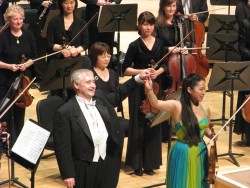 Piotr Gajewski led the National Philharmonic in three tried-and-true (some say "worn-out") symphonic staples on Saturday at Strathmore. But a fresh look at them won't hurt. Felix Mendelssohn's music, which occupied the evening's first half, included his Hebrides Overture ("Fingal's Cave"), Op. 26, and his Violin Concerto in E Minor, Op. 64, with diva violinist Sarah Chang.

Truly a renaissance man, Mendelssohn not only composed but also was a virtuoso pianist, demanding conductor, prodigious letter-writer (with a wit equal to that of German poet Heinrich Heine's acerbic barbs). But it was Mendelssohn's descriptive powers as an artist (he produced lyrical, finely detailed drawings and paintings) that surface in the composer's programmatic "Hebrides Overture." Gajewski captured Mendelssohn's vision of roiling waves in the sea's monstrous cavernous depths, conveying a scenario of motion in stasis - long swells of sustained harmonies in the strings and waves of rushing melodies, the brass serving as roaring tides crashing against the cave's rocky walls.

Mendelssohn's Violin Concerto in E Minor likewise calls up emotion-filled innuendos, visualizing human feelings in subtle ways. This was the perfect vehicle for Sarah Chang to give way to emotional expressivity with her signature stage histrionics, a whirling dervish moving everywhere, shuffling to and fro and often back-bending at a 90-degree angle. While her vibrato was too broad for the andante, her intonation was nearly flawless, her agile bowing seemingly effortless. The capacity audience couldn't stop cheering her performance.

Brahms's Symphony No. 3, Op. 90, was a highly charged affair, each orchestral section managing passages of lustrous tone quality and tight ensemble. The players were at their best in the final two movements, bringing moments of serene delicacy in the allegretto and incisive drama marking the final allegro.

All in all, a worthy crowd-pleaser.