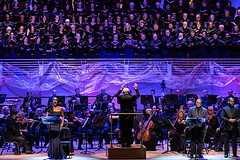 Led by Conductor and Artistic Director Piotr Gajewski, the National Philharmonic debuted "America's Requiem: A Knee on the Neck"—a colossal and captivating meditation on George Floyd and the reckoning of a nation.

Lauded by The Washington Post as a "bracing, captivating and essential new work", the requiem by composer Adolphus Hailstork and librettist Herbert Martin employed an emsemble as immense as its topic.

The orchestra, flanked by a chorus of 135 singers and fronted by trio of powerhouse soloists, leapt to ecstatic highs and devastating lows, thanks in no small part to Maestro Gajewski's expert direction. "Under Gajewski’s hands," wrote Michael Andor Brodeur in the Post, "the orchestra surged now and then from candlelit prayer to roaring pyre".

Maestro Gajewski's success in presenting this pioneering large-scale work, especially given its cultural and political weight, is a great feat indeed. "Hailstork and Martin have created a requiem that feels alive and has only just taken its first breaths," wrote Brodeur, "and we owe one another as Americans to listen".