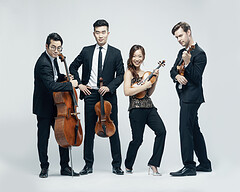 Sciolino Artist Management has announced that the Rolston String Quartet will collaborate with renowned clarinetist David Shifrin in the 2022-23 concert season, performing in multiple U.S. venues in October 2022. Each of their concerts together will feature either the Mozart Clarinet Quartet in A Major, K. 581, or the Brahms Clarinet Quintet in B Minor, Op. 115, paired with two string quartets from the ensemble’s current tour repertoire, which includes Haydn’s Opus 33 quartets 3 and 5, Dvořák’s “American” String Quartet, and Gabriela Lena Frank’s Leyendas: An Andean Walkabout. Listen to the Rolston String Quartet with David Shifrin perform the third movement from Mozart’s Clarinet Quintet.

In 2020 the quartet welcomed two new members to its ranks, as violinist Jason Issokson and cellist Yoshika Masuda joined first violinist Luri Lee and violist Hezekiah Leung as successors to founding members Emily Kruspe and Jonathan Lo, respectively. The reconfigured ensemble is performing at its peak, showcasing the effortless precision and cohesion of a top-tier string quartet. Its intimate and highly dynamic musical rapport is on full display in a recent video recording of the Allegro movement of Beethoven’s String Quartet No. 7 in F Major.

Those who have heard the new quartet in person have been quick to note the group’s captivating virtuosity and passion. Commenting on the Rolston String Quartet’s recent concerts with the Phoenix Chamber Music Society, Executive Director Janet Green wrote, “We’ve never had a more enthusiastic reception for any musical ensemble that was new to our Phoenix audiences. Everyone was blown away by their artistry and enthusiasm...I heard the same superlatives over and over again. The second concert was Friday evening; on Monday morning, we booked them for an encore performance. They are that good!” As the performing arts world emerges from a lengthy pandemic-induced hiatus, the new Rolston String Quartet is poised to make an indelible impression on audiences around the world.