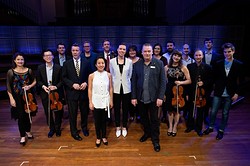 Tessa Lark (center) with fellow musicians at the May 2019 Musica Viva festival in Sydney, Australia

Musica Viva Festival Concert 5, titled Scenes, brought together chamber music pieces from the Baroque and Romantic periods, through to the 20th Century where the performer was also the composer (Edgar Meyer performing his own Concert Duo for Violin and Double Bass). It was an interesting program that exposed me to a variety of chamber music formats and styles.

The concert opened with Dvorak’s Piano Trio No. 3 in F minor, Op. 65. Cellist Timo-Veikko Valve and pianist Konstantin Shamray joined violinist Tessa Lark. This piece, according to Genevieve Lang’s notes in the program, was written at a time when the composer was experiencing a spiritual crisis as he was torn between loyalty to his country and the promise of international success. The tension and conflict of emotions were captured by the trio’s quick tempo changes, and Valve’s expressiveness in the first movement. Lark captured the main theme beautifully through her piercingly enchanting violin playing.

The third movement started with a slow cello solo – played sensitively and expressively by Valve – which provided a stark contrast to the first and second movements. I closed my eyes at that time, feeling the harmony of music for a brief moment. Then the speed picked up as the final movement arrived. I really enjoyed Valve’s cello playing – colourful and rhythmic, providing layers to the performance and adding depth and power to the trio.

After the interval, pianist Aura Go and flautist Adam Walker joined Valve to perform French composer Thierry Escaich’s Children’s Scenes at Twilight. The opening of the first scene was atmospheric and impressionistic, which sounded similar in style to French impressionistic composers Debussy and Ravel. Go played continuous descending scales in the background while the flute and cello played the main melody, but it quickly erupted to a loud outbreak – “an expressive climax […] that prefigures the somber and weighty mood of the third scene”, as per the program. The flute was clearly the lead in this movement – loud and aggressive at times, which disturbed the harmony presented by the other two instruments.

The second scene was capricious and playful, punctuated by a lot of staccato playing. It was rhythmic and appeared quite difficult to play, but none of the performers missed a beat. The third scene was slow and very dissonant. The piano was powerful and rhythmic, providing the beats for the other two. The cello produced sharp and loud sound and helped to lift the performance to the climax.

In the final movement, I saw all three instruments in a different light: they all sounded like percussion instruments as they seemed completely focused on the rhythmic patterns instead of the actual melody. It was an intense performance but the musicians played well together, to which the audience responded with enthusiastic clapping and cheering.

Meyer’s 1999 Concert Duo for Violin and Double Bass was my personal favourite of the evening. Meyer, in a cool yellow/blue-striped tie, was joined on stage by Lark, and they played this 13-minute piece from memory. They stood facing each other, almost as though getting ready for a battle.

In the first movement, the Classical influence was mixed with elements of blues and country music, which provided interesting harmonic and melodic ideas. Meyer and Lark blended traditional and modern music well. When they played fast running passages, I felt images of bulls running on green grass – almost like a cowboy’s song. The fourth movement was fast and contemporary, which reminded me of Yanni’s pop piano pieces. Meyer hardly looked up throughout the performance, but had great chemistry with Lark as they played in sync.

At the end, Meyer finished his own piece by turning his double bass around – a very stylish ending to his own composition, earning him a standing ovation at the end.