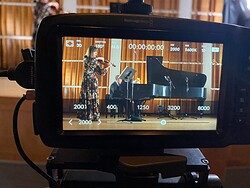 So maybe this is how concert life, or at least a major part of it, is going to operate for the foreseeable future.

On Thursday, Oct. 1, Cal Performances begins a weekly series of streaming recitals to take the place of the scheduled fall season that vanished in the face of the COVID-19 pandemic. Dubbed “Cal Performances at Home,” the series is slated to run through January 2021, with 16 newly recorded performances by the Tetzlaff Quartet, cellist Yo-Yo Ma, pianist Leif Ove Andsnes and soprano Julia Bullock, among others.

Needless to say, it isn’t how anyone would choose to experience music, any more than Zoom is the ideal medium for schooling or a personal heart-to-heart. But this is what we’ve got, and to judge from the series opener — a vibrant and often captivating recital by violinist Tessa Lark with pianist Andrew Armstrong — the format may well have enough going for it to carry us through these dark times.

It helps that Lark, a past winner of the Walter M. Naumburg Competition, is a performer of both grit and tenderness, with a distinctive string tone that combines meatiness and finesse in equal measure. And she’s assembled a canny recital program, built around the C-Major Fantasy of Schubert, that seems designed to bring out her most vivid artistic qualities.

She and Armstrong were recorded together on the stage of Merkin Concert Hall in New York City, so the visual aspect of the recital feels entirely familiar. There is just enough cinematographic variety to keep things lively — one camera angle giving us Lark more or less head-on, another going close in on Armstrong’s dexterous keyboard work — but the music naturally takes pride of place.

And there is plenty to savor. The Schubert is centered around a set of variations on one of the composer’s own song melodies (a favorite technique of his), overlaid with music of striking intricacy and technical challenges — none of which seem to daunt either performer in the least.

Grieg’s Violin Sonata No. 3 in C Minor, by turns gnarled and serene, gets a robust performance in which the music seems to pick up certain harmonic ideas from the Schubert and send them off in unpredictable directions. For a snapshot of Lark’s energetic yet keenly controlled virtuosity, you could not ask for better than the “Romanian Folk Dances” of Bartók, with which the recital gets under way, or the fiery exhibitionism of Ravel’s “Tzigane,” with which it concludes.

Yet perhaps the jewel of the recital comes in Ysaÿe’s Sonata No. 5 for Unaccompanied Violin, which Lark delivers in all its eerie, off-kilter radiance. The second movement, “Danse Rustique,” is the overt link to some of the other folk-tinged music on the program, but it’s the breathless passagework of the first movement that calls forth some of Lark’s most brilliant execution.

Intercut between the pieces are snippets of Lark’s spoken commentary, like personalized program notes, which come as a reminder that the entire genre is something of a hybrid — part live concert, part edited artifact. That’s why it is both charming and disorienting when Lark appears at the end of the recital and, pretending to acknowledge the enthusiastic applause that would surely have come from a live audience, delivers an encore, her own irresistible “Appalachian Fantasy” built on bluegrass strains.

Once again, it is the applause — or rather, the silence where the applause should rightly be — that marks this enterprise as something not entirely natural. Every piece on the program, performed with such eloquence and flair, concludes in a tiny sonic vacuum, an empty space that applause has always been able to rush in and fill. If and when we can return to some form of live music making, we may have a newfound appreciation for that unruly, excited, loving outburst.