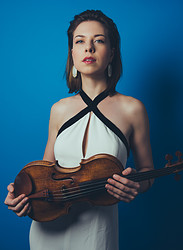 NPR’s From the Top, the nationally distributed radio program showcasing America’s brightest young classical musicians, has named violinist Tessa Lark to a newly formed team of co-hosts and creative artists beginning with the 2020-21 season. In this role she will collaborate musically and conduct on-air interviews with the guest musicians as well as mentoring them in leadership, community engagement, and career development. Lark will co-host select episodes of the program with pianist Peter Dugan, who has been named permanent host. Also named as co-hosts were clarinetist Alex Laing and violinists Vijay Gupta and Charles Yang. The fifth member of the team assisting Dugan is pianist Orli Shaham, who will share duties with him as a solo host.

In announcing the new personnel, From the Top Executive Director Gretchen Nielsen noted, “Along with Peter and our remarkable team of co-hosts and creatives, we look forward to ushering in this new chapter in From the Top’s history as we continue to showcase the stories and talents of today’s extraordinary young musicians.”

Lark is no stranger to the role of hosting From the Top: she and string bassist Michael Thurber, her partner in the violin-bass duo Tessa Lark & Michael Thurber, co-hosted an episode of the Boston-based show last November. It was a homecoming of sorts for the pair. Both had been featured on From the Top early in their careers, and it was in that venue where they first met—the start of a fruitful musical and personal partnership.